The Importance of Quit Attempts

In 1990, about 50 percent of smokers had made a quit attempt in the past year. By 1999, it had increased to about 60 percent. Unfortunately, since then the percentage has stopped rising.1 Healthy People 2020 sets a goal of 80 percent of adults making a quit attempt per year.

Quit attempts are vitally important in population-based cessation, because most tobacco users must try repeatedly to quit before they succeed. Every percentage point increase means an additional 36,000 smokers trying to quit each year. Fortunately, the percentage of smokers who say they want to quit is approximately 70 percent, indicating a basic receptivity to advice to quit. The process by which tobacco users cycle through quitting and relapsing until they finally quit for good can be conceptualized as a “Quit Machine”. Daily smokers either quit altogether and become former smokers, or in some cases reduce their smoking to the point that they are low-rate or non-daily smokers. Low-rate smoking is often a jumping-off point for quitting altogether. Among recent former smokers, relapse is common. They may relapse to non-daily smoking or go all the way back to daily smoking. Their desire to quit usually remains, leading them to cycle through the process again and again, till they become former smokers long enough to be less vulnerable to relapse.

From a public health perspective, the goal should be to get all tobacco users onto the Quit Machine and to help them cycle through it as expeditiously as possible, until they have successfully quit. The focus should be on normalizing quit attempts, just as the overall tobacco control movement has been successful at de-normalizing tobacco use. Anything that can speed up the machine, motivating relapsed smokers to make fresh quit attempts, will result in increased cessation rates. Efforts should be designed to increase the desirability of quitting, to increase the sense of urgency about quitting earlier in life, and to reach all groups of tobacco users. 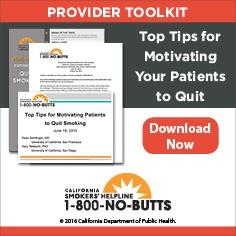